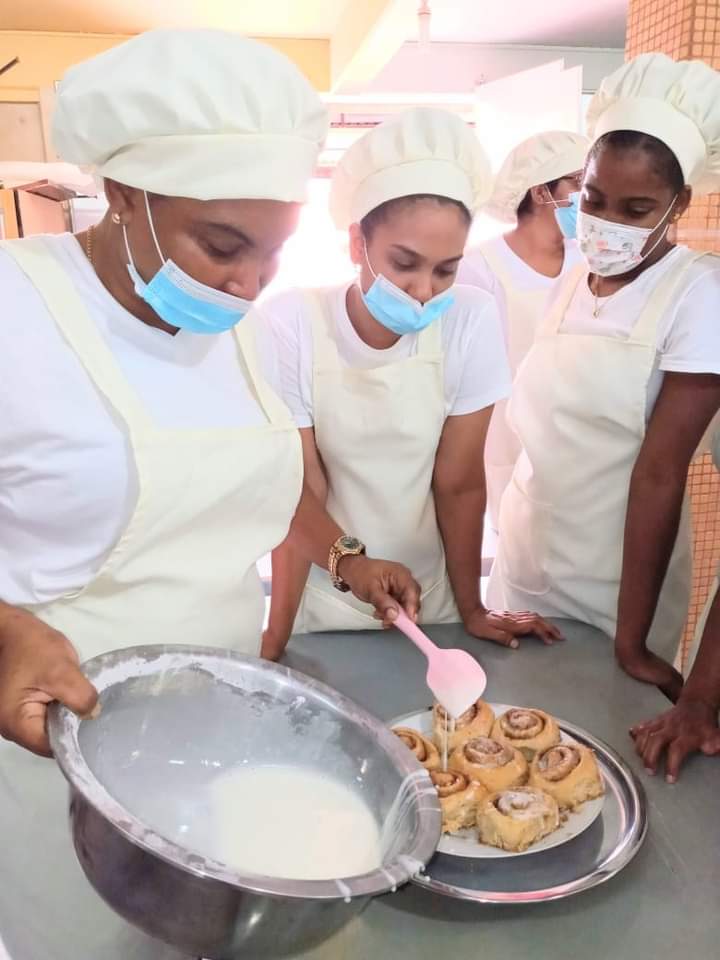 By Malisa Player-HarryKaieteur News – When the Humanitarian Mission Inc. Guyana was established on August 15, 2015, at Ankerville, Port Mourant, Berbice, the aim was to have a facility that could provide all the services and training necessary to equip and empower women, men, and youths.

Almost seven years later, the Non-Government Organisation (NGO) is still doing just that and even more.

Led by Suresh Sugrim, an extremely passionate and driven Guyana-born philanthropist and humanitarian, who resides in the United States, the NGO has already left an indelible mark in the lives of many.

At the mission, there are several classes being offered which range from sewing, garment construction, cake decoration, food preparation, electrical installation (Level 1), electrical repairs, AC refrigeration and cosmetology (hair, nail and face). Added to that, outreaches are done for persons who suffer from disabilities or those Sugrim describes as the less fortunate and thus “are in dire need of it.”

Just recently, the NGO made a multi-agency donation, which saw a quantity of supplies, including a wheelchair, a container of masks and other essentials being handed over. Among the beneficiaries were the Ministries of Health and Education, the Police Force, Fire and Prison Services, all of which Sugrim and the mission have been donating to for a number of years.

“What we have been doing at the mission is to help those individuals to give them a second chance, a lot of boys, men and women did not have an opportunity to go to school and because of that, they feel worthless and turn to many social ills. So what we do, we take them off the street, build their momentum of hope and teach them life skill education,” said Sugrim.

He added that the lack of education in many of these individuals has contributed significantly to the hardships experienced, particularly in Berbice, which he said lacks employment opportunities at government agencies. He said with the new skills attained at the mission, these individuals are now equipped to go back into their respective communities and contribute in a meaningful way while at the same time, generating an income to support themselves and their families.

In 2021 (April-May), a total of 160 persons enrolled and graduated from classes at the mission, and in December another 173 graduated. The first semester for 2022, which ended in May, saw 120 persons graduating at the University of Guyana. The mission has since brought on board another batch of 120.

According to Sugrim, these individuals come from various social classes and from various parts of Berbice, all enrolling with the intention to learn a new skill.

“The persons are from across this region, as far as Edinburgh, Stanleytown, Crabwood Creek, 74, 72, various areas. People from all levels of society run to the centre to learn a new trade which is a good sign that women, especially, are starting to empower themselves,” Sugrim added.

Sugrim believes that women should not only be regarded as homemakers and baby machines but must be held to a higher standard, an equal standard to that of men. “We talk about trade across the board, we just got four programmes from the Board of Industrial Trading (BIT) and I lobbied to have a lot of women come to this programme, prior to that, in our electrical course here, we had students who were women from Canje, Stanleytown and other areas and they started to take up this trade…these are skills trade, it is money and there is nothing less for a woman to be equal to a man,” he asserted.

Surgim said too that many of the persons who access the skills training at the mission have gone on to make something of themselves and contribute to the home financially.

“I know that in this region, jobs are not here, there are a lot of students who finish high school with 12 or 13 subjects and can’t get no jobs, everybody is at home. How much can we do?” questioned Sugrim. Moreover, he went on to share that it was an intentional move when he decided to craft a path for individuals to begin working for themselves rather than have them sit and wait on government to hire them.

Participants of a cooking class During several engagements with the Chief Education Officer of the Ministry of Education, Sugrim said that he spoke of the need for more vocational training, using his daughter as an example. Sugrim said that his daughter attended half-day of the regular schooling and the other half-day vocational-technical training. He said that when she graduated from high school and “could not find a job, she turned to her tech skills and started making money. So while she went to high school, she left with two diplomas.” He believes that such a system, with focused support, can be adopted and yield successful outcomes in Guyana.

“I strongly suggest that it should be implemented here because teachers would call from public schools from time to time and ask what we are offering here. They tell us that they have some students that are physically good with their hands and we identify that skills will do well for these students right now. Trade men, journeymen, make as much as a doctor and an attorney,” Sugrim said.

The mission in the past has assisted persons who were eager to start up their own business by providing an interest-free loan and those persons were given the opportunity to repay when it was possible with the view of having a revolving fund to help others similarly. Sugrim said he is hoping to lend even more assistance by providing scholarships to persons in the future.

The humanitarian said he is now more focused than ever on assisting those with disabilities and mentioned that since the establishment of the building, over 3000 persons have been enrolled and empowered.

There is no age limit and persons from anywhere can sign up, he said.
Persons can reach out to the mission via Facebook @ Humanitarian Mission Guyana Inc., by emailing hmgberbice@gmail.com or calling 336-6913 or 615-2455.

75 Berbicians equipped with skills to start a business, gain employment